It is believed that non-conformist Christians were meeting in Groby as early as the 1820’s, possibly in a frameshift’s workshop and shed on Zion Hill, but the first reliable records tell of the Free Methodists of Grooby (as it was then spelled) being presented with a freehold plot of land by Thomas Sutton, on which they built their church.

The Chapel stood at the end of a narrow winding cul-de-sac, now known as Chapel Hill, surrounded by fields and a few cottages.  As far back as 1870 Groby was associated with Oxford Street Congregational Church in a kind of circuit system.  Oxford Street established churches in other parts of Leicestershire, from Newtown Linford to Whetstone, and it was probably their influence that led the Free Methodists to build a congregational church!

In 1882 the church was extended to provide a new Sunday School Room and later a gallery. 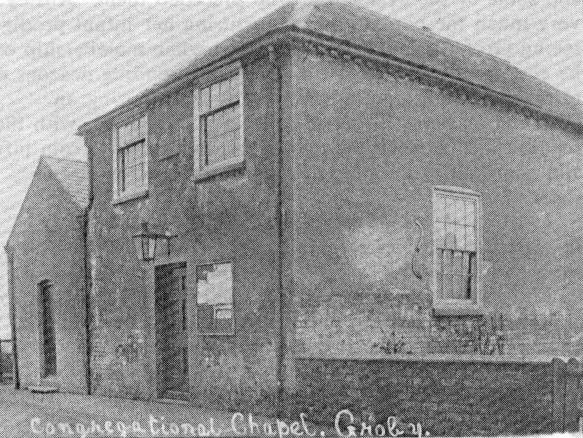 Some of the older members of our congregation can still remember the old church, but by the 1970’s the building was becoming old and dangerous (a net had to be suspended from the ceiling at one point to stop bits of plaster falling on the heads of worshippers!).  Some of the adjacent allotment land was purchased with a view to building a new church, and after much prayer and fund raising, God blessed this small but faithful congregation with the means to carry this out.  The old building was demolished and the land used for car parking, and in 1981 the present church was opened (the adjacent hall having been in use since 1976).  The whole episode is a testimony to the faithfulness of God and the faith of what was then (and to some extent still is now) a small congregation.  We have seen similar answers to prayer in more recent years as we strive to move on with the Lord.

The present day ethos of Groby URC is an evangelical one, and most of our members do not come from the URC tradition.  To some extent we are the Free Church in Groby rather than the URC.  Our most recent minister, Rev Sue McKenzie, has now retired.  Previously, Rev. John Hall, was the first of our ministers to live in the village and to be responsible only for Groby URC.  Before that we had shared a minister with the neighbouring village of Anstey where the manse had been located.

We have strong links with the parish church, which also has an evangelical emphasis, and together we comprise Churches Together In Groby (CTG), working together in several outreach projects as well as holding regular joint services and prayer meetings.  In May 2000 the two churches signed a covenant to work together even more closely and in which we agreed “to do nothing separately that can be better done together”.

Since the late 1980s our church has been growing in numbers and a lot of young families have arrived.  On a Sunday morning the church is pretty full, but we love it that way!  Our Young Church (known as “Y.Church”) is a thriving group and for the older teenagers there is a separate group, known as “Revelation”.  For the adults, services are shared between the minister, visiting preachers and some of our church members.  We rarely have Sunday evening services, but we are welcome to join with St. Phillip & St. James’ in the evening.